Sweet, Fearful Dog And Her Feline Best Friend Need A Home Together 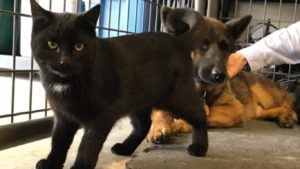 While driving her daughter to school one day, Myka Berkson spotted a gorgeous German Shepherd along the highway. She pulled over at a house nearby and asked a person there if the dog belonged to their family. As it turned out, the dog didn’t belong to anyone. According to KLTV.com, the family told Myka, “If you can catch it, you can have it.”

The German Shepherd was extremely fearful of people and would not let Myka or anyone else near her. But not long after spotting the dog, Myka saw a small black kitten who approached her, and when she did, the dog followed.

The Berksons are experienced in pet care, especially with German Shepherds. The couple currently has five dogs, including their fifth ever German Shepherd. Myka previously ran a volunteer rescue group and she and Andrew were both active in finding homes for pets in need. Experience told them that though the dog would be a challenge, getting her off the streets was possible.

Twice a day for four months Andrew and Myka Berkson returned to the area to feed the cat, who they call Gizmo, and the dog, Libby. Gizmo proved to be much less guarded than Libby, but the couple decided they would not take one without the other, as they appear to be bonded.

Even after four months, Libby would not allow herself to be touched. The couple had tried to trap her, but she proved to be too clever for tricks! It became clear that she would need to be sedated to get her to safety and away from the highway.

Their plan took a lot of time and patience so it would not be traumatic for Libby. First, Andrew and Myka built a small pen for Libby, where they fed her for two weeks. Then, with the help of a veterinarian, they sedated her by adding oral meds to her food one day, then giving her an injection. While she was under they were able to vaccinate her and get her to safety. Andrew and Myka tell iHeartDogs,

“We then brought her home and felt much relief and joy to get her here. In the week she has been here, she is making progress every day though we are measuring this in millimeters not inches. As you can see in the video, we are now able to pet her and walk with her on a leash. She is though still incredibly fearful and cowers every time we go to touch her.”

The Berkson family absolutely loves German Shepherds, but both Andrew and their daughter are allergic to cats. Though they could keep Libby and find a home for Gizmo, they believe the two are bonded and belong together. They’re looking for a home where both Libby and Gizmo are welcome. The Berksons estimate that Libby is about five or six years old, and Gizmo is nine months old.

“Gizmo the cat is just a joy and is easy. Libby is really a work in progress and is going to take a lot of time, patience, love and a very gentle touch. We don’t know her history but think she was probably abused in the past and has trouble trusting people. Not at all aggressive but scared.

“Interestingly, we were able to put our hands in her bowl while she ate and stroke her muzzle but were never able to pet her or catch her. She is very smart and cautious.

“She needs someone with dog experience – this is not a job for beginners or someone who expects that if they just add food and water that she will instantly turn into an easy regular old dog.”

The ideal home will have space to play, and loving people who can show Libby gentleness and patience.

“We think it might be better if they went to a home without other pets but it is difficult to know for sure. There is a chance that the right dog might be helpful in modeling for and teaching Libby how to trust and find joy in people. We think that older kids would likely be okay as they would understand being slow, gentle and quiet in dealing with her. Will obviously have to have a fenced yard and they absolutely have to be inside pets.  Libby needs to be around her people constantly in order to bond and trust.”

Can you or someone you know give Libby and Gizmo a forever home? Interested parties should contact the Berksons at tylercatanddog@gmail.com.

The post Sweet, Fearful Dog And Her Feline Best Friend Need A Home Together appeared first on iHeartDogs.com.

Sweet, Fearful Dog And Her Feline Best Friend Need A Home Together

Homeless Dog Evades Rescuers, Insists They Follow Him To Mom And Puppies – I Love My Dog So Much