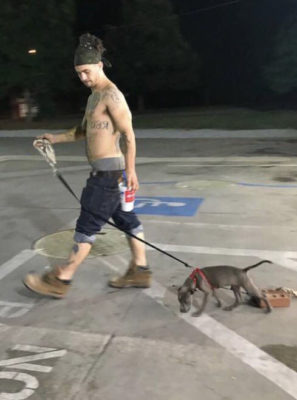 A disturbing viral photo has led to the citation of a North Carolina man for animal cruelty. The image shows a small puppy apparently dragging a brick behind him as his owner walks him. The man, Scottie Lee Lewis , claims he was ‘strength training’ the young dog. The endangerment he put his pet through says otherwise.

Unbelievably, authorities left the vulnerable animal in the custody of this man after they questioned him. They instructed Lewis to take the dog to a veterinarian and then left the premises. Only later were they advised that they should at least cite this man for animal cruelty.

Since then, Lewis has claimed someone ‘stole’ the dog. Now, this poor pet that could have sustained permanent injuries has gone missing. Police are banking on the word of a man with an extensive criminal history as to the dog’s whereabouts.

Sign this petition to demand authorities investigate this case fully and secure justice for a living being that was allegedly abused, or possibly worse.

Scottie Lee Lewis has acquired quite a criminal record and allegedly put others at risk of harm in the process. Your department has clear evidence that he allegedly harmed at least one living being: his pet dog. You let him go, and now that dog has mysteriously vanished.

Don’t let this endangerment continue any longer. This animal’s life has value. More so, this pet represents what can happen when indifference and a lack of action against injustice reigns freely.

Investigate Mr. Lewis for the highest degree of animal cruelty your state advises. Send a message that his allegedly reckless actions—and reckless disregard for the rule of law—will not stand.