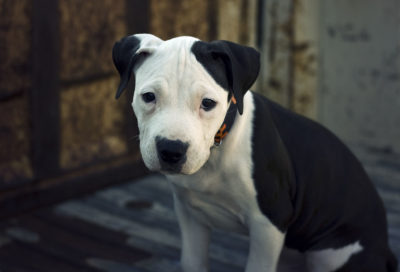 Goal: Punish Florida duo charged with endangering a pit bull by leaving the dog in a hot car.

A pair from Florida were arrested for animal cruelty after reportedly locking a pit bull puppy in a hot car on the beach. The authorities found the windows cracked and beachgoers spraying water onto the poor animal, possibly to keep them cool; according to reports, the pair claimed they had intended to bring back water for the dog after a shower, despite not having water with them. The dog has since been taken by animal control.

It is simply disgusting that these people would allegedly leave their dog to bake in the heat. Even with the windows cracked open, an animal should not be left alone in a car on a hot day even for one minute. Too many animals have died in the past few years due to being left to suffocate in hot cars, and if the authorities had not shown up when they did, it is all too possible this dog could have been the latest victim.

There is simply no excuse for what this pair allegedly did. Sign this petition to ensure that they face justice for their reported actions.

A man and a woman allegedly left their pit bull puppy locked in their car with the windows barely open, with the excuse that they intended to bring back water for the animal. The authorities discovered the dog just as the couple arrived, without water; the couple was arrested and charged with animal cruelty and the dog taken by animal control.

You must not let this alleged abuse go unpunished. Too many animals have died in the past few years after being left to suffocate in hot cars, and it is a miracle that this dog was found in time. Please ensure that the pair faces justice. There is simply no excuse for such actions.