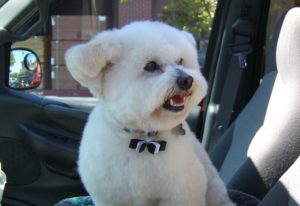 Making the decision and knowing when it’s time to help your dog pass is never easy. It’s often the bravest, most un-selfish choice some of us will ever have to make. To make things a little easier many people choose to give their dogs bucket lists, or a last special day. Our dogs don’t really care if they’re married before they leave us, or want to be made honorary fire dog. But these things help ease the pain for us and give us just a few more happy memories to keep with us forever.

This sweet video recently went viral after being posted to Facebook. Kira Beltran grew up with her dog, Gizmo, since she was 4 years old. While home from college, Kira noticed that Gizmo was in pretty bad shape. His hearing and vision were leaving him. His health had seriously declined and he was often in pain. Kira knew the time was coming to say goodbye.

Kira talked to Kennedy News and Media about Gizmo:

“My first and favorite memory with Gizmo was the day we got him, I was so excited. My mom wanted a dog who wasn’t super young because we knew the odds of an older dog getting rescued were lower.

“The people there had given me a hot dog to feed him and I thought I was supposed to give him the whole thing, but everyone yelled ‘no’ after I dropped it on the ground. As a scared and confused child, I reached for the hot dog just as he did and I took it away.

“My mom said she knew he was the one when he didn’t even flinch when I took it back – he didn’t growl or try to bite me. After that Gizmo was always with me and he has definitely become one of the best things that has ever happened to me.”

Kira decided to give Gizmo one last happy day before it was time to cross the rainbow bridge. There was no big party, there were no vows exchanged or gigantic steaks. She kept it simple, visiting a few favorite places and showering Gizmo with treats. Kira and Gizmo did it their way, and it was perfect.

“I was hoping to take him at least around the block, but his legs were so sore due to the arthritis that we only made it to the corner of my street and back which took 30 minutes.

“I also let him stop wherever he wanted and mark his territory. After eating as much as he wanted that day, I met up with my mom to drive him to the vet. The drive was hard, I let my mom hold him the whole way while I tried not to cry.”

so happy i got to take you to pee in all your favorite places and treat you to your favorite things on your last day. thanks for being my best friend for the past 18 years, gonna miss you Gizmo 💕 pic.twitter.com/8cO6u1dOP0

“We arrived there and said our goodbyes, and we wanted to make sure we were there with him until the very end.”

“I miss having him around so much, but I’m happier knowing his pain is over.”

The post Girl Says Goodbye To The Senior Dog She Grew Up With In Sweet Video appeared first on iHeartDogs.com.

Dogs Found At Chernobyl Arrive In U.S. For Adoption

Tilda Swinton directs her dogs in an operatic music video