As a rule I think it’s fairly safe to say that animals shouldn’t be dressed up in clothes. Up there with lions and elephants being chained up and kept in cages by unscrupulous circus groups, it’s fairly barbaric.

Ok, so maybe not that bad, but they don’t to wear them, they don’t think they look ‘cute af’, and what’s more they just don’t need them.

Dogs are already kept on leads and paraded around pubs as if they’re some fashion accessory, at least give them some dignity and don’t squeeze them into tartan pants, or, with Christmas fast approaching, an elf outfit just so you can post the picture on Instagram. This is all kinds of wrong.

But it would seem I’m in the minority and there is good money to be made in the canine clothing industry.

One woman who has really jumped at the chance is Lisa Barnoff, who has designed a range of leggings for dogs, which will protect their paws from the everything life has to throw at them.

The American created the garments with waterproof rubber soles, which help to keep the little pooch’s paws nice and dry during those wet winter walks and stop them from injuring themselves. Awww. 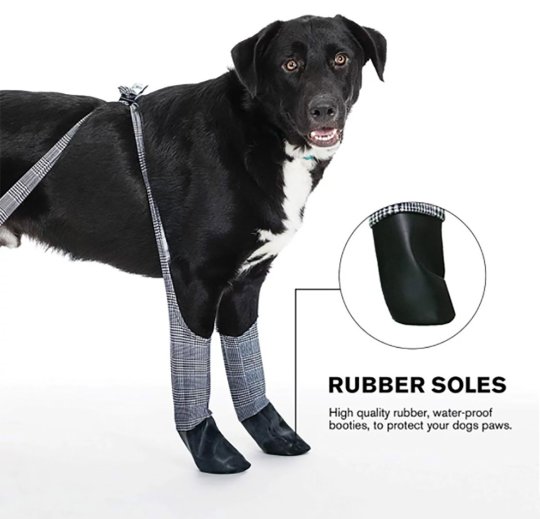 Walkee Paws offers a range of fetching pants, from your standard classic pair, to confetti, and even a camouflage design – just be careful not to lose them, though, right?

Depending what size you need to fit your furry friend, the leggings are priced between $19.99 and $29.99. But can you really put a price on loving your pet?

Barnoff first came up with the idea when she made a pair for her own dog, Toffee, and from there she decided to build her own business to give other owners the chance to protect their pets.

On her website, Barnoff wrote: “My development and marketing experience in toys and pantyhose gave me the inspiration for the first Walkee Paws prototype.

“I cut a pair of my old pantyhose into little leggings, made to connect over Toffee’s back so the pantyhose stayed in place. The pantyhose acted like a sling, making the whole experience easy and comfortable for Toffee and they stayed on! From here, the idea for Walkee Paws was born.

“This process was tedious, with lots of trial and error during the development stage. The paw area took the longest amount of time.

“We needed the material to be comfortable and thin enough so Toffee could feel the ground while he was walking, yet strong enough to withstand water, pavement, snow, and general wear-and-tear from outdoor walking.”

Emergency Dog Health Care : How to Tell if Your Dog Is Sick