Chained up dogs in Dingli prompt an Animal Welfare reprimand

An owner of tied-up dogs in Dingli has been instructed to find a “more suitable” means of housing the animals after an investigation by the Animal Welfare Directorate, an Environment Ministry spokesman said. 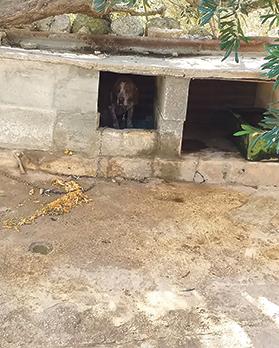 “Shocking” pictures of the dogs were sent to the Times of Malta after passers-by came across the animals being kept “in a pitiful state” in the Ta’ Baldu area.

“They looked sick and petrified of people,” one woman who came across the animals said. “The huts they’re chained to have no blankets inside and they have to live in their own dirt,” the woman added.

An inspection by the authorities found that the dogs were not being kept tied as a permanent means of housing, the spokesman said.

“Notwithstanding this, the Animal Welfare inspectors instructed the owner to immediately find a more suitable means of housing in line with the new regulations,” the spokesman added.

“This case will be followed up in due course to confirm the situation has been rectified,” he added.

“It is useless having a law [against chaining dogs] with no enforcement,” he said.

Chaining dogs became illegal last year, after much insistence by NGOs and a Bill on the issue was published over two years ago.

A subsidiary legislation to the Animal Welfare Act published in October made it illegal to chain dogs or allow them to have inadequate collars.

“No individual can keep a dog tethered, or cause a dog to be tethered, fastened, chained or restrained to a stationary object as a primary method of confinement,” the legislation says.

New enclosure specifications were also included, so that owners would be fined if a dog was found in a space too small for its size.

Thousands of reports on animal cruelty are received each year, with reports spiking during the summer.

Animal welfare inspectors told Times of Malta that dogs chained to balconies during the summer often die or become seriously sick when they spend hours outside exposed to the sun.

Child killed chasing her dog will be buried with beloved pet