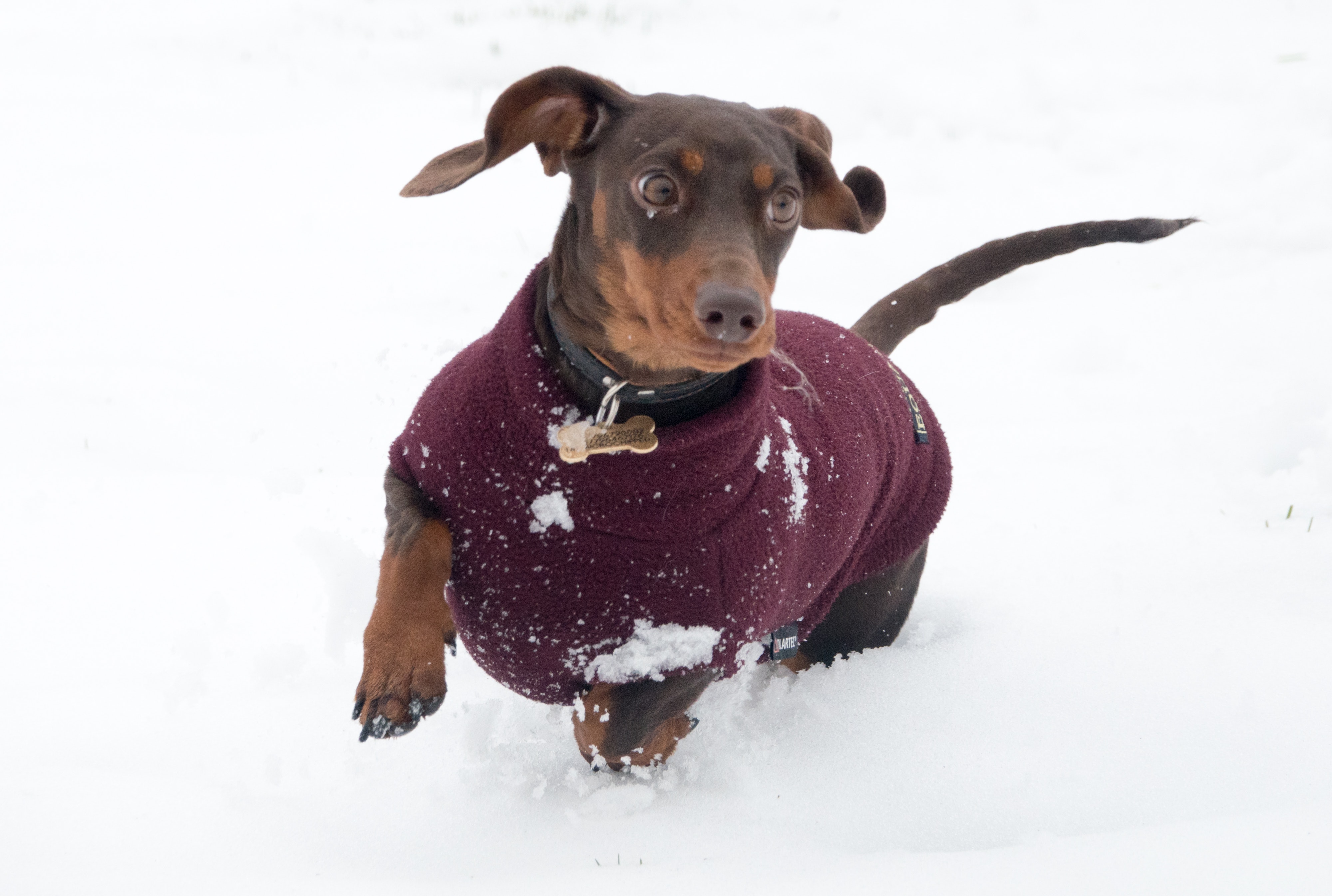 I’m sure I’m not the only one feeling the winter blues right about now. It’s wicked cold out and I’ve got cabin fever big time. Maybe that’s why I’ve been thinking about getting a dog lately. After all, a four-legged friend can cheer you up now and keep you smiling all year round. Plus, if you’re factoring in how many good February dog names there are to choose from, now is absolutely the best time to bring home an adorable little fur ball.

There are so many sources of inspiration to draw from when naming your February pooch. There’s the Super Bowl, the Grammys, and the Oscars. There’s Chinese New Year, Valentine’s Day, and don’t forget President’s Day. And you can always just look outside your window for inspiration. There’s been some pretty epic weather phenomenons this winter (i.e. Polar Vortex) that could be used for naming fodder, especially if you’re living in a state that saw record-breaking low temperatures.

So whether you’re looking for a weather-themed name or something more inspired by pop culture, this February dog name round-up is for you. One of these amazing monikers is sure to be the perfect fit for your new four-legged friend.

At the 2019 Grammys, held on February 10, Cardi B. made history by being the first solo female rapper to win ‘Best Rap Album,’ according to The New York Times. She also slayed on the red carpet and during her performance of ‘Money.’

Naming your pooch after this fierce female definitely hits the right notes.

If it’s still blizzarding out where you live, then naming your dog after Jack Frost who Wikipedia describes as the personification of frost, ice, snow, sleet, winter, and freezing cold seems all to appropriate.

For those who follow the Chinese zodiac, 2019 is the year of the pig, the earth pig to be exact, according to Chinese New Year.

So if you want to name your dog after after the twelfth zodiac symbol, consider ‘Zh,’ which is Mandarin for ‘Pig,’ according to Han Trainer.

If you’re like me, you’re straight-up obsessed with Bradley Cooper’s character, Jackson Maine, in A Star Is Born.

And since the film has earned eight Oscar nominations, including ‘Best Actor,’ according to Variety, naming your dog ‘Jackson’ could be a great way to show your support for Cooper taking home gold.

This Valentine’s Day, some lucky people out there are going to receive adorable puppies with big red bows around their necks. Swoon.

If you’re one of the lucky ones, then naming your new pup after the holiday seems pretty apropos.

Say what you will about the Patriots winning the Super Bowl yet again, but Tom Brady is sort of the stuff of legends. Name your dog after him, and he’ll totally be the top dog at the dog park.

Rami Malek is favored to win an Oscar for ‘Best Actor’ for his stand-out portrayal of Freddie Mercury in Bohemian Rhapsody, according to Awards Watch.

Name your dog after the legendary Queen frontman, or the actor who played him, to show that your dog is a champion.

President’s Day is honored in February it’s on February 18 this year so crack open a history book for some naming inspiration. If you choose ‘Lincoln’ as the name for your pup, he or she will definitely go on to do great things.

When I think about Valentine’s Day, I think roses. If you get a dog for V-Day, naming her after the flower of love is super fitting and super cute.

You’ve probably heard that Eskimos have 50 different words for snow, and that turns out to be true, according to The Washington Post, which noted that the Inuit word pukak, is used for the ‘crystalline powder snow that looks like salt.’

Naming your dog, ‘Pukak’ sounds very exotic, and it lends itself to the most adorable nickname (Pukie).

If Groundhog’s Day is one of your all-time favorite movies, why not name your dog after the most famous groundhog there ever was, Punxsutawney Phil? He’s sort of a big deal in February.

The Polar Vortex of 2019 was insane, with some parts of the country experiencing temperatures colder than Antarctica, according to USA Today. If surviving that deep freeze inspired you to go out and get a dog, then naming him/her after the weather phenomenon is actually kind of perfect.

Not sure how you’ll be spending President’s Day this year? How about getting a dog and naming him after our 26th president, Teddy Roosevelt?

Fans of Rhianna know that her birthday falls in the month of February (Feb 20 to be exact!). Why not pay tribute to this rockstar/fashion legend/entrepreneur/queen, by naming your dog after the one and only, RiRi?

You know that dog is going to be the life of the party.

2017 list of top dog names is out — and most are human-inspired!

Top 10 Wacky Dog Names and the Meanings Behind Them